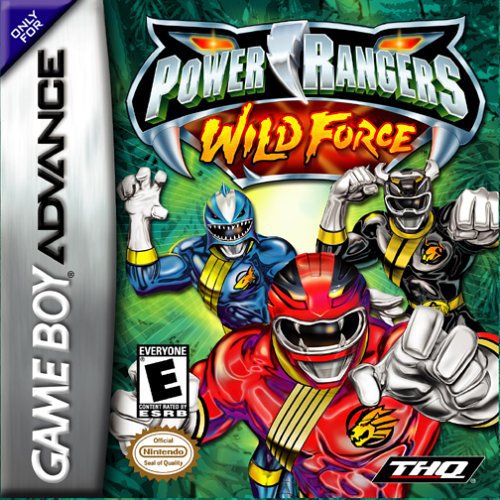 Power Rangers Wild Force is a fighting game that plays a lot like several different older arcade fighting games such as The Simpsons and Street Fighter II, only not as fun. The game starts in a three-quarter-top-down view where Org's minions drop out of the sky, jump you, get beat up, and drop power-ups. After all the enemies are defeated then you'll challenge the level boss who is incredibly difficult to defeat. If you manage to smack him down then the boss will become gigantic and it's time for you to pick a Megazord and finish him off in a side-view battle similar to Street Fighter II, only without all the special attacks. Defeating the gigantic boss awards you an animal crystal that can allow access to different Megazords.

There are special attacks in the game but they're easy to perform and don't seem to do much. The Megazord battle is a bit more challenging in that you have to press a series of buttons at the right time as they appear on screen. Special attacks aside, the controls in the game aren't too bad. They respond reasonably enough although your Ranger likes to walk forward as he attacks in the first mode. For a fighting game, the controls are brutally simple which may or may not be a good thing depending on what kind of game you're looking for.

Except for the normal size bosses the gameplay in single player is really too easy for it to be fun for more than about 10 minutes. The manual mentions that this game is really meant to be played as a multiplayer game and I have to agree. For instance, those 'impossible' bosses are much easier to take down with multiple people. You also all have to work together by pressing the appropriate buttons at the same time in the Megazord battle to perform the special attacks. The downfall is that there are no head-to-head, death-match type battles (or at least the manual didn't mention anything of the sort).

Overall this is a pretty easy game except for those near-impossible normal-size bosses. Unfortunately the game gets boring pretty quick and the only replay value is to go back to play other levels and acquire any animal crystals you missed the first time around so you can use other Megazords. The multiplayer mode offers some extra incentive to play if you like cooperative gameplay but you'll each need your own GBA and cartridge. The graphics, sounds, and cut-scenes will probably appease any Power Rangers fans but just take away precious time from the rest of us that just want to whoop some Orgs. Unless you're looking for a cooperative multiplayer fighting game or are a Power Rangers fan, I probably wouldn't recommend this game, and even then, only as a rental.