Although The Rite of Spring ballet caused a near riot at its Paris premiere and assured Igor Stravinsky a place in the pantheon of artistic enfants terribles, it was the earlier ballet, The Firebird, that catapulted him to stardom in the classical world. On this new Reference Recordings CD by Eiji Oue and the Minnesota Orchestra, we have performances of both the earlier ballets, as well as a performance of the later symphonic poem The Song of the Nightingale. All three pieces could not be more disparate in style, and are far removed from Stravinsky’s seminal works in neo-classical style and his post-modern flirtation with serialism.
The Minnesota Orchestra, at least on this sojourn, are in excellent young hands. Eiji Oue, a Bernstein protégé and Tanglewood alumnus, makes an auspicious recorded debut. His control of all three ballets is exemplary and allows Stravinsky’s fantastical ideas to shine at every opportunity. The orchestra play these fiendishly difficult scores with apparent ease. All departments of the orchestra are first class with a special mention going to the woodwinds. Each principal from the orchestra plays with great character and an undeniably beautiful sound that one associates with only the finest players.

The wonderful playing is supported by one of the finest sounding orchestral compact discs I have yet to hear. Professor Keith Johnson, the resident Reference Recordings engineering phenom, has recorded the Minnesota Orchestra to perfection. There was a time when a recording on an audiophile label meant wonderful sound coupled with an average performance, however, companies like Reference Recordings have changed the stakes. Recorded in HDCD® 24 bit sound, Johnson and producer Tamblyn Henderson have given us warm, detailed and, above all, spectacular sound. All the audiophile buttons are pressed during the performances. The treble is crystalline and extends so high that the upper partials of woodwinds, harmonics on strings and the ambient sound of Orchestra Hall is captured perfectly. The midrange is rich and full of character, and the bass – wow! The bass is quite unbelievably accurate and dynamic. All bass retrieval is completely in tune with the musical performance. Not just with the pre-requisite bass drum, but in the subtle beauty of sound from all the bass instruments.
Micro dynamics are also superbly realized. Stravinsky uses a huge orchestra to great effect and the sound is thrilling, but gentle details are also superbly realized. Even when listening at low levels, the recording never loses its grip on Oue’s interpretation. Delicate muted violins and harmonics on flutes and strings are just some of the quiet sounds that make for a gentle respite from the heroism and violence.
While I prefer the complete Firebird ballet, the highlight tour captured in the Suite is fine, and was beautiful enough to leave this listener wanting more. The performance, along with The Rite of Spring, stresses transparency and beauty of sound. This is ideal for The Firebird, but a little too safe, at least for my ears, for The Rite of Spring. If you are looking for a rough, earth-cracking Rite, you should seek out Boulez (the earlier performance with the ORTF orchestra) or Stravinsky’s own performances on Columbia. Driver sound card yamaha xg ymf724f-v windows 7. While Oue’s approach certainly has merit, I don’t think Stravinsky and the dancers had this style in mind as the famous riot ensued! For a combination of the two disparate styles, try Tilson-Thomas on DG (lp 2530 252) – not a conductor I usually warm to, but an amazingly well performed and exciting Rite with the BSO. Listen to the Ritual of the Rival Tribes (rehearsal #57 Boosey and Hawkes edition) to the end of the Adoration of the Earth. At times, Oue combines accuracy and slow tempos that undo the excitement. Under Tilson-Thomas, the Boston Symphony unleash a torrent of sound that leaves you breathless.
The performance of the Song of the Nightingale is full of the transparency and beauty that is so prevalent in the other performances. However, unlike The Rite, this score calls for a more delicate style and Oue and the orchestra do not disappoint the listener. From the opening rush of notes, Oue connects this fairly compartmentalized score with the utmost authority. A special mention must go to the principal flute for a fabulous characterization of the Nightingale. Truly beautiful playing.
After listening to this disc countless times, one is amazed at Stravinsky’s musical invention and genius. Stravinsky is most certainly the star of the recording. However, for such a young and relatively inexperienced conductor – at least on the international stage – Eiji Oue has certainly made an impact with this debut recording. He could not have chosen his partners better. Composer, orchestra and engineer have been combined to make his performances grace the ear and soul, and cannot be too highly recommended.
— Anthony Kershaw audiophilia.com 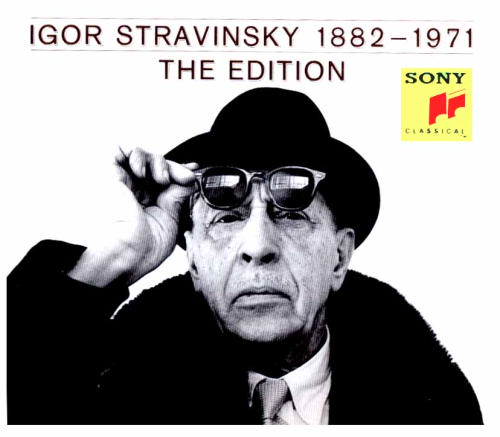